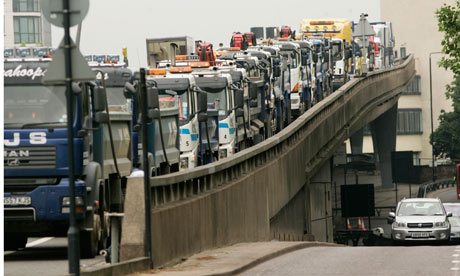 Trucks on a section of the A40 highway in London. You'd need 2,755 to carry a billion dollars in nickels. And then drive back. Photograph: Sang Tan/AP


As proof that some people will believe absolutely anything, the latest story doing the rounds is that following Apple's win in the mutual patent infringement case against Samsung, in which the jury assessed a $1bn fine, "Samsung paid Apple its $1bn fine by sending more than 30 trucks to Apple's headquarters loaded with nickels [5-cent pieces]". And that when Apple security was just about to freak out, Apple chief executive Tim Cook was called by Samsung who told him this was how they were paying the billion-dollar fine.

Well, at least one fact is right: Tim Cook is chief executive of Apple.

On to the debunking.

1) Samsung's fine ($1.049bn) isn't yet payable; the judge hasn't ruled. All we have is the jury's verdict. The judge's decision, which could include a tripling of the fine, is due on 20 September (or possibly 6 December now; it's unclear). Until then, Samsung only has to pay its lawyers. That should be less than $1bn.

2) If Samsung tried to pay the fine in five-cent coins, Apple could legitimately tell the trucks to turn around and head back to Samsung (if the trucks weren't imaginary in the first place). Here's the relevant phrase from the US Treasury web page:


Q: I thought that United States currency was legal tender for all debts. Some businesses or governmental agencies say that they will only accept checks, money orders or credit cards as payment, and others will only accept currency notes in denominations of $20 or smaller. Isn't this illegal?

A: The pertinent portion of law that applies to your question is the Coinage Act of 1965, specifically Section 31 U.S.C. 5103, entitled "Legal tender," which states: "United States coins and currency (including Federal reserve notes and circulating notes of Federal reserve banks and national banks) are legal tender for all debts, public charges, taxes, and dues."

This statute means that all United States money as identified above are a valid and legal offer of payment for debts when tendered to a creditor. There is, however, no Federal statute mandating that a private business, a person or an organization must accept currency or coins as for payment for goods and/or services. Private businesses are free to develop their own policies on whether or not to accept cash unless there is a State law which says otherwise. For example, a bus line may prohibit payment of fares in pennies or dollar bills. In addition, movie theaters, convenience stores and gas stations may refuse to accept large denomination currency (usually notes above $20) as a matter of policy.

So basically it would be Apple's choice whether it accepted the payment. (In the UK, the rules are stricter: "legal tender" - meaning payment for a court-ordered debt - mean, says the Royal Mint, that 5ps are only legal tender for amounts up to £5, for example. It's only when you get to £1 that you can pay debts up to "any amount".)

The story appears to have originated on "humour" site 9gag, which Mobile Entertainment describes succinctly as "a place normally reserved for z-list memes and screenshots of Facebook statuses." Yup, this one fits that.
Apple latest technology Samsung Tech News

Paytm Cashback Offer for the Month November How to get this deal Click here  to go to Paytm . Use Coupon code :  EOM25 Offer:- Get Rs 25 cashback on recharge/billpayment of Rs 250 and above. Code can be used only 5 times per user per number. Cashback will be credited within 24 hours of the transaction into user’s Paytm Wallet Not Valid for Airtel Prepaid Users(Use Airtel4 for cashback on Airtel Prepaid connections).but valid on Airtel Postpaid Connections. Valid on prepaid recharge, postpaid bill payment, D2h recaharge, electricity bill payments Valid on Web and App. Valid till End of November.