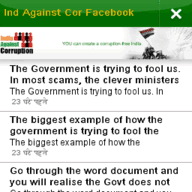 Here’s a treat for all the Android and Symbian fans. Recently after the rise of Anna and his march to curb corruption throughout India has got an immense response from the common people.
So as a token of appreciation an Android as well as a Symbian application has been launched recently in the app market tagged in as ‘India Against Corruption’.
Just like most of the cases this is too a free application and everyone having a phone running the Android and Symbian operating system into their phones can directly download the application and can enjoy the features.
India Against Corruption (IAC) is a citizen’s movement to demand strong anti-corruption laws. Lokpal bills were introduced several times since 1968, yet they were never passed by the Indian Parliament.
Features Of This App
Push to Sd Card support
Latest News
Real Streaming Videos
Polling
Q&A
Latest About Lokpal
Info About Lokpal
Volunteer Registration
Latest Event
After a fast by veteran social activist Anna Hazare and widespread protests by citizens across India the Government of India constituted a 10-member Joint Committee of ministers and civil society activists to draft an effective Jan Lokpal Bill. The primary focus of IAC movement is to ensure a strong Lokpal bill.
Nokia users can download the app from http://store.ovi.com/content/143338
Android users can be download from  android store.
Anna Hazare Software