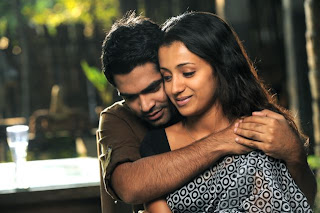 First, we must thank Goutham Vasudev Menon for giving a refreshing and feel good cinema in the era of useless action masala. Vinnaithandi Varuvaya is really a pure magic and works a lot with the viewers who easily identify their own flashback or current memories while watching the lead pair.

Karthik (Simbu), a Tamil Hindu mechanical engineer with the dreams of making films, meets Jessy (Trisha), a Malayalee Christian girl, who is an IT professional. And yes.. it is love at first sight! She lives on the top floor with her strict father (Babu Antony), mother and an aggressive brother, while Karthik and his family have rented out the lower portion of their house. Karthik's passionate wooing melts Jessy, who finally succumbs to his ardent love. But her family and religion stands in the way of true love. Whats happening for their love is explained in a different way in the climax.


Silambarasan... a great performer! He is really awesome and has done his role with fantastic touch. His way of expression and his tears in the climax are really classic. In fact, he exposes his action in a very cool and controlled manner, which portrays him big. Keep it up Simbu!

And Trisha looks good and has delivered fine performance and even overtakes Simbu in few scenes as a confused and excited girl with real love. She is perfectly exposing her possessiveness over Simbu and inability to overcome her parents in the second half. The chemistry between the lead pair is looking real and mind boggling.

The picturisation of the songs is simply remarkable and AR Rahman steals the hearts with his soothing, mesmerizing melodies like Mannippaya, Hosanna. Manoj Paramahamsa's camera work is a major plus point of the film. Antony's editing without using any gimmicks makes the narration silken smooth.

However, the film Vinnaithandi Varuvaya is having few minor flaws. The slow phase of the second half and frequent use of bad words (Chennai Tamil) are major minuses in Goutham's narration. But these are all not preventing one to enjoy the content of true and painful love of the film!