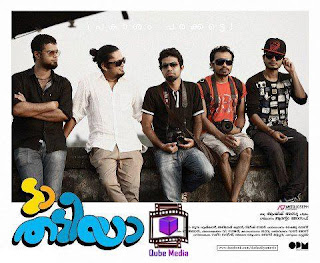 Here’s Aashiq Abu’s next venture! A visual treat and an absolute drama fun-filled movie, there is much to wait for! Revolving around the lifestyle of a fat guy, the tale tells that story of those thousands, the one amongst you!

Ashwin P Nair
‎Da thadiya (ടാ തടിയാ )
One of my friends told that
it's an average one
but just don't care such type of nonsense. :D

Farhan Akthar
Behind every successful man there is a woman ..

Shijith Ard
such a good movie

Akki Akhil Mohandas
Watched "Da Thadiya"
it's a complete Entertainer
And
Thank You for the Character; 'Rahul Vaidhyar'
He's very familiar to me and society...
...

Diljith Tweets
‎Da thadiya (ടാ തടിയാ )... is a small film with a BIG heart.! it has been a wonderful journey through the life of a Fat guy. Dj Sekhar has played the role of the protagonist N Sreenath Bhasi as his buddy. Both of them shares good Chemistry.
Bijibal's music gives
much boost to the film and at the same time his Bgm carries the movie. "Enthanu Bhai" already gave some hype 4 this movie. Shyju khalid's cinematograhy is speechless.!! Films are always belongs to Directors N Aashiq Abu proved it once again.:) u can see his class in this film. yup, its definitely a Director's cut.!!

Anand Ajayghosh
‎Da thadiya (ടാ തടിയാ )- This is the story of a 20 something old big fat boy! The movie shows certain happenings in his life over a period of time. Sekhar Menon is quite impressive as the 'Thadiyan'. He's got huge screen presence (obviously) and his acting is also ok. Srinath Bhasi has done a good job as thadiyan's cousin and best friend. Nivin Pauly deserves special applause for playing a role which is quite different from his hero image. Ann Augustine appears as hero's girlfriend. She fits in t the role well. Ann needs to work on her malayalam diction, which is more on the manglish side. Shyju Khalid's Cinematography was excellent. Songs and BGM was good and goes well with the overall theme. Script is well written. It starts off as a simple story but later addresses some socially relevant issues prevailing in our society. Dialogues were good and there were some catchy one-liners too. Last but not the least, a word about the real hero, the drirector, Aashiq Abu - Superb; Hats off to you dude.
Thanks a lot Aashiq Abu and team for this awesome movie.

Gauttam Jeyadev
I saw "Da Thadiyaa...." . i just loved it. an
excellent film. I got a free ticket as per the offer
for 1st day 1 show
B-)

When cinema reflects the lives of those amongst us and takes a break from the clichés of normalcy, those unique and distinct movies are born. And that is just what ‘Da Thadiya’ offers. The story of a fat man, cons of being over-weight, and of course the pros attached to, ‘Da Thadiya’ is a mixture of subtleness and simplicity. Yeah! Exactly that which falls in the ‘feel-good’ category. Aashiq Abu has ensured that his audience doesn’t get bored of his themes which are novel and distinct, this time as well. The overwhelming response and cheers, topped with applauds from the crowd bears testimony to the fact that ‘Da Thadiya’ shall run a few miles.

Starring newbie Sekhar Menon and Sreenath Bhasi in the lead roles along with Ann Augustine, Arundhati Nag, Nivin Pauly, Vinay Fort, Maniyan Pillai Raju, Edavela Babu, Sreeraman, and more, ‘Da Thadiya’ tells the tale of a fat guy, the one whom you and I would find amongst us! Luke Prakash (Sekhar Menon) who leads a normal life in the city of Kochi later turns out to shoulder some huge responsibilities, and is also tagged ‘superhero’ in the process. His love life is given an added sparkle with the presence of Ann Mary Thadikaran (Ann Augustine). His biggest critic, supporter and bestie is his cousin Shaddi (Sreenath Bhasi). Arundhati Nag lovingly called the ‘Night Rider’ plays the role of ‘Ammachi’, one which you wouldn’t miss giving applaud! An actor who has showcased her talents nationally, Arundhati Nag’s performance has added to the sheen.

Well, you might find a few ‘running-around-trees’ and romance flowing in the air, just what is needed in the story to pep it up. For a start, Sekhar Menon’s performance is definitely a striking one. The chemistry is perfect with the duo Sekhar and Bhasi. Nivin Pauly’s, quite a different appearance on-screen looks nice. The cast has put up a good show.

The songs of ‘Da Thadiya’ had gone viral on social networking sites. ‘Enthanu Bhai’, now hummed by every kid, has caught the attention of populace. The lyrics of songs are crunchy and peppy. They strike the right chords and amplify the enchantment offered by the music as well. Dubstep, least experimented in Malayalam cinema, takes a front seat through this one, in BGM and songs too.

Script writers Abhilash Kumar, Syam Pushkaran and Dileesh Nair have ascertained that their audience takes home some worthwhile messages through inspiring dialogues. The script is clean, smooth and nice. Shyju Khalid’s cinematography hasn’t failed to entertain cinema-lovers this time as well. With distinct frames and noteworthy shots, this young DOP is truly a promise to Malayalam cinema. Kochi is captured at her best in ‘Da Thadiya. Mostly shot in and around Kochi, catch a glimpse of the ‘Queen of Arabian Sea’ and her inmates pictured perfect!

Aashiq Abu with his team, this time too, promises pure entertainment to the cinema-lover. With uber-coolness, perfect blending of Salt N’ Pepper and a shout out from the woman of today, his movies have awed and inspired. This one too, is adding a golden feather to Aashiq Abu’s director’s cap!