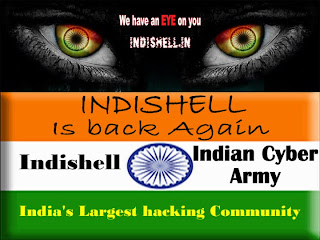 Lets come to the point straight away .. Why is Indishell not retaliating to recent Bangladesh Cyber attacks after declaring cyberwar?? a lame question asked by many. Indishell declared cyber war?? where?? and when?? Did any Core member involved in this?? Did any core member approched any media or posted on status that Team has declared the Cyberwar?? The answer to above all questions is Absolute " No ". The core team of Indishell group didn't announce any cyberwar or till date involved directly in any defacemnt of BD or any other websites.

Now to the facts.. Indishell core team is just a handfull of guys who are busy now with their real life and plans. Indishell core team members are Lucky , Silentpoison , INX root, Darkl00k, RDX ,[email protected],  Rootdevil , Ethicaln00b , G00glewarrior , Neo, C00ltoad , Atul, Maxcaps , Reborn, Unknownsoldier.   .. Now show us one post of link where we or any one the core member declared any thing against any one. When was the last time you saw any defacement by any one of the core members?? . We are real people like you we do have lives to manage so don't drag us into bullshit claims that Indishell declared this cyberwar.

Indishell has no recruitment camp going on .. And where the hell did we approved those guys as core members of Indishell?? Those who declared this  are now either deactivated their FB accounts or sitting silent hoping for a miracle that core team will respond. We are sorry guys we don't have time to retaliate to some bullshit started by you.  We are busy right now with our real lives so don't drag into some crap which we didn't started or involved.

As from now on if we see one single defacemnt in the name of Indishell or greetz to Indishell or core members names expect strict action. Yes Indishell is not your boss you can do what ever crap you want but do it on your own don't use Indishell name or try to start some shit and hope core members will come and aid you. I didn't understand should i laugh or pity when i saw people tagging Indishell in their names .. and  code injector who exposed Ashell and both were Indishell members ??? LMAO ... what to say?? no limits to Facebook stupidity.

We know what we are , If a real threat is detected against our motherland we will respond subsiquently don't hope and wish we will retaliate and go loosecanons for some bullshit war started by some one. It also came to our notice that there were few Indian Hackers who aided or connected with the recent Bangladesh hackers, we are investigating the matter any proofs found against such traitors will be forwarded to the concerned government authorities. Expect strict actions from Core team of Indishell and Indian authorities if found you are connected with BBHH or their bullshit groups or still involved in Defacing websites with Indishell name"

We are not dead, we still have a eye on every one who are against our motherland both Domestic and International ...

Note : If you consider yourself as loyal member of Indishell then Tag and spread this Note..
Hacking hacks Tech News