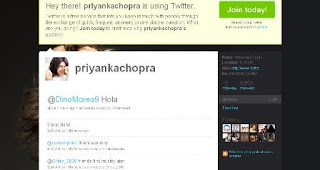 Cheer up all Priyanka fans!! Priyanka Chopra is active on tweeting from her Nokia or her laptop wherever something interesting happens."I have great fun interacting with my 'Tweeps'. At least they believe it's the real me, unlike some of you guys, who still aren't sure that it's me reading your mails." she told The Hindustan Times. She has 6,760 followers and following thirteen peoples on twitter.

Priyanka's tweet on Michael Jackson's demise
"I cannot believe it! MJ no more... He was the reason I started loving music. Thank you MJ the inspiration for all of us. The true king of pop,"

After a long time bigrock is back with .com domain sale. Get your .com domain just for Rs 99. Click here to avail the offer     (Coupon code will be automatically added to your account) Terms and Condition s End Date: 30 Sept 2016 This is offer is valid for first year Purchases of .com domain